Local bicycling, transportation and environmental groups are gearing up for the April 13 Streetfilms Mini-Festival at Albany’s Madison Theater. Groups will be setting up information tables for the audience to peruse and learn about upcoming sustainability, bicycling and transportation initiatives prior to the film festival. The Livingston Avenue Bridge Coalition will be there, so too will be partner organizations, including Albany Bicycle Coalition, Capital District Transportation Committee, Capital CarShare, the Albany Police Department’s Traffic Safety Stakeholders’ Committee, Bikeable UAlbany, PAUSE, Solarize Albany, South End Bikeway Link, Parks and Trails New York and Albany’s Protected Bike Lane Coalition. 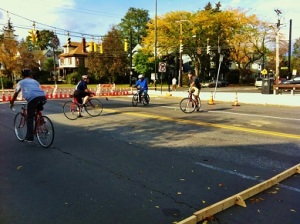 Theater doors will open at 6:15, the free film festival will start at 7 pm and will run about 45 minutes.  Following the screening, there will be a Q and A with Streetfilms’ own Clarence Eckerson. The event is sponsored by Albany’s Protected Bike Lane Coalition and the Madison Theater — the Madison concession stand will be open before the films start and selling snacks.

Founded in 2006, Streetfilms has become the go-to organization for educational films about sustainable transportation, and inspires action and behavioral change worldwide. Individuals, public agencies, non-profit organizations, schools, and transportation advocacy groups use Streetfilms to educate decision makers and make change for livable streets in their communities.

← Frank Sinatra and the Livingston Avenue Bridge
Celebrate Bike To Work Day by taking part in a Local Bike to Work Challenge! →