“Theme from New York, New York” (or “New York, New York”) is the theme song from the Martin Scorsese film New York, New York.  The song was skyrocketed to fame by In 1979, when it was recorded by Frank Sinatra, for his album Trilogy: Past Present Future. The song has become closely associated with old Blue Eyes ever since and it’s just about everybody’s pick for theme song of New York City. Heck, they close out Yankees games to this song. So what does it have to do with the Livingston Avenue Bridge?

The Chairman closes out “New York, New York” with a slight revision on the original ending lyrics, crooning:

The song is packed full of memorable lyrics, but this one in particular is notable.

Cue a tie-in. From our friends at Streetsblog comes encouraging news: People who cross the Pulaski Bridge on foot and by bike are crammed into one eight-foot lane next to six lanes for motor vehicle traffic. DOT will convert one southbound auto lane to a two-way bike lane, to be separated from pedestrian and car traffic by concrete barriers. Sounds great. So is that it? 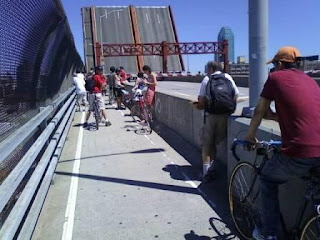 Cyclists wait for the Pulaski Bridge to close before pedaling across. (Courtesy the “Mid-Life Cycling” blog)

The Pulaski Bridge, which carries six lanes of traffic and a pedestrian sidewalk over Newton Creek and the Long Island Expressway, connects Greenpoint in Brooklyn to Long Island City in Queens.  The Bridge is a 54m double leaf, trunnion type bascule bridge. It has two 10.5m roadways divided by a concrete median barrier. It also carries a 2.7m pedestrian sidewalk.

NYCDOT is adding a bike lane to a lift bridge that already has a separated walkway. Is that evidence of a safe and efficient cycling facility on a movable bridge or what?!  It”s also illustrative of the wonderful advances NYC has made to accommodate all modes of transportation in a city that never sleeps.  Heck, NYCDOT’s page on Movable Bridges over the Newtown Creek practically brags about their infrastructure which accommodates cars, pedestrians, and cars.

Cue up the “Theme from New York, New York” and think about it.  If they can make it there, they’re gonna make it anywhere. It’s up to you, New York State DOT.