New York State Senator Charles Schumer joined us in Albany to pledge his support for the Livingston Avenue Bridge Walkway. Here’s an Except from the Senator’s speech:

“When the new bridge is built, we have a fresh chance to reconnect these two downtowns and funnel more visitors to key areas on both sides of the river. Failing to include a pedestrian component in this bridge would be shortsighted, and we can’t make that mistake. That’s why I’m urging everyone from CSX to Amtrak to NYSDOT to climb aboard with this plan, so that every design going forward will link up the biking and walking paths on both sides of the scenic Hudson.”

Great things are happening on the East and West banks of the Hudson River in the Capital Region. 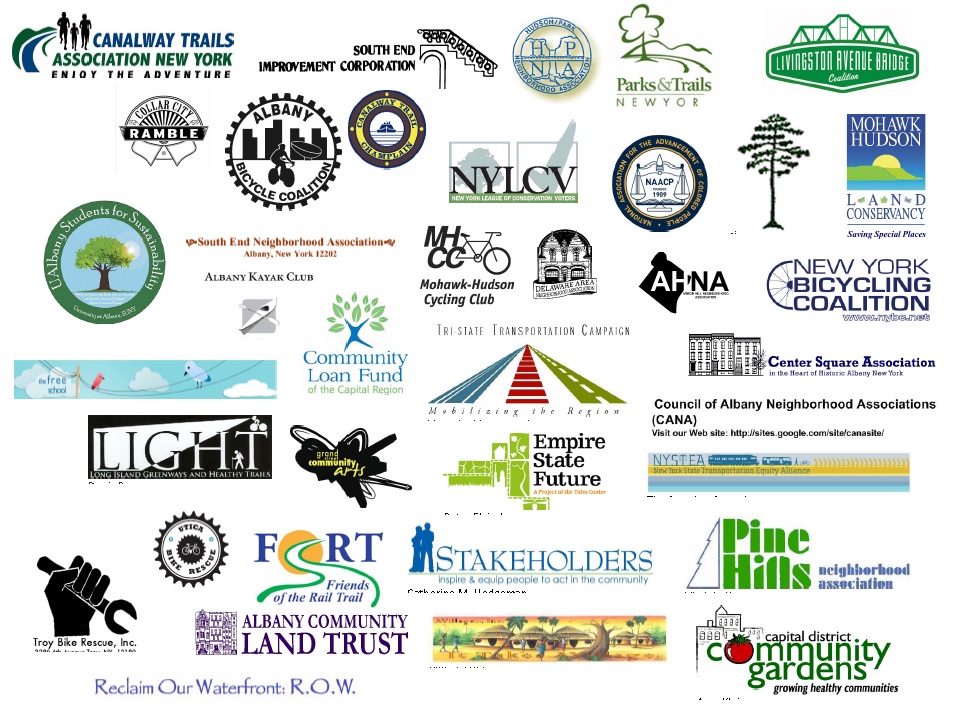 Construction on Livingston Avenue bridge to start in 2023, DOT says – The state hopes to start construction on the new $400 million Livingston Avenue bridge by the end of 2023. Department of Transportation Commissioner Marie Therese Dominguez said Wednesday the project has cleared a key federal environmental hurdle, allowing DOT to move into the final design phase of the project… Albany Times Union

$400 million Livingston Avenue Bridge replacement to move forward – The $400 million plan to replace the Livingston Avenue Bridge is set to move forward, the state Department of Transportation announced Wednesday. Construction is expected to start by the end of 2023 and finish by the end of 2026. Another prominent feature of the planned replacement is a separated path for bicycles and pedestrians that will provide a level connection between the cities of Albany and Rensselaer. – Business Review

Most Capital Region legislators find at least one thing to like in Hochul speech –   Assemblymember John McDonald III, D-Cohoes: “The governor is prioritizing replacement of the Livingston Ave. Bridge between the cities of Rensselaer and Albany, a major regional and upstate rail connector that needs pedestrian and cyclist access…. – Schenectady Gazette.

Advocates say time is now for Albany bridge rehab – Advocates hope a critical crossing over the Hudson River in Albany will receive a needed upgrade after the passage of the bipartisan federal infrastructure law. – Albany Times Union

Schumer pushes infrastructure plan – Schenectady Gazette article on the Senator’s Federal Infrastructure Plan that would include federal funding for the Livingston Ave. Bridge, among other critical projects

Albany Skyway Plan Moves Forward – WAMC coverage of the Albany Skyway, a “highline” for Albany that could serve as the Western approach to the Livingston Ave. Bridge shared use path.

Full Speed Ahead For Area Bike/Hike Trail – WAMC coverage of the proposed Albany-Hudson Electric Trail featured a nod to the Livingston Ave. Bridge.

City and State Magazine featured the Livingston Avenue Bridge as it’s “Centerfold” in an article about revitalizing Albany’s downtown and waterfront.

Times Union Editorial Board opinion: Cycling is the way to go. Imagine a bridge across the Hudson River designed with cyclists in mind. A 21st-century bridge has to do more than accommodate trains… (Read more)

Metroland Weekly published an in-depth article about the Livingston Avenue Bridge and the advocacy effort underway to re-establish the walkway.

The Albany Times Union published a great opinion piece, supporting the re-establishment of the walkway on the new Livingston Avenue Bridge.

Check out this 2012 Schenectady Gazette article “New railroad bridge may be shared with hikers, bikers –  There’s only one way to bicycle or walk over the Hudson River between Albany and Rensselaer.”

CSX, Amtrak urged to get on board with Livingston Avenue bridge replacement project – Troy Record

2 comments for “Publicity and Support”