Albany Proclaims May 2015 as Bike Month! 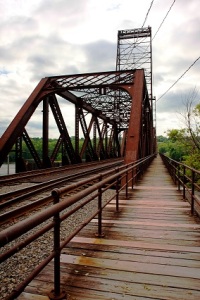 The City of Albany Common Council unanimously passed a resolution last night, proclaiming May 2015 as Bike Month in the City of Albany. Among the great “whereas” items in the resolution is a shot out to the Livingston Avenue Bridge Walkway!

“WHEREAS, in 2011, the Albany Common Council, recognizing the Livingston A venue Bridge’s potential to connect a growing network of statewide multi-use trails, including the New York State Canalway Trail, the Albany County Rail Trail, and the proposed Rensselaer County Trail, passed a resolution urging State and Federal partners to re-establish the Livingston Avenue Bridge walkway at
such time that the bridge is replaced…”

A big “thank you” to the City of Albany City Council for recognizing the health, economic, social, and environmental benefits of bicycling and taking steps to create pleasant, efficient,  and safe environment in which to ride.

← Celebrate Bike To Work Day by taking part in a Local Bike to Work Challenge!
Celebrate Earth Day by supporting the Livingston Avenue Bridge Walkway cause →