The Erie Canal opened the West. It provided the raw materials, the labor, new ideas and the visionary pioneering spirit to an emerging America. The Canal put NYC’s ports into overdrive and provided the backbone for the economic engine that powered New York, cementing our legacy as the Empire State.

Today, the Canal still has a small role in the transportation of goods, but tourism in the Canal’s most prominent contribution to the communities it serves. The Canal is an economic force of another type, bringing in tourism dollars and helping the revitalize the small communities on its banks. 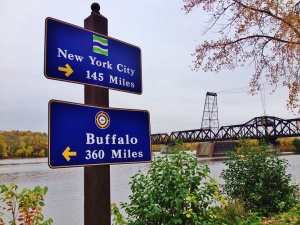 PTNY has touted the Study to support its “Close the Gaps Campaign” and the non-profit hopes that the positive economic results will instill government, business and tourism officials with the confidence to invest in additional ECT marketing, promotion, economic development, and trail enhancement efforts. Each year, mile by mile, the trail improves, off-road gaps are completed, and new community links are formed. Of course one of the most apropos new links to the Erie Canalway trail, which in Albany shares the nomenclatures Corning Preserve Trail and Mohawk Hudson Bike Hike Trail, is the Livingston Avenue Bridge. Imagine the benefits of providing an attractive gateway for visitors to the region that could in theory, bring their bikes up from NYC, depart from the Rensselaer Train Station, and then take a single day ride or better yet a multi-day trip along the Erie Canalway Trail. That 1.58m visitors figure could skyrocket, so too could economic impact in very desirable net new spending.

We don’t need a wedding of the waters to make this connection, we need a meeting of the minds and action from our state, federal, and private partners to make the Livingston Avenue Bridge a critical link to a modern, sustainable, and thriving Erie Canalway Trail.

← A place for the Livingston Avenue Bridge Walkway in the Hudson River Comprehensive Restoration Plan
Look what you did! →