Albany’s Warehouse District and Connections to the Livingston Avenue Bridge

The western approach of the Livingston Avenue Bridge terminates in an area of Albany referred to “The Warehouse District.” This part of the city, north of downtown, has experienced a great deal of change in the last decade. Restaurants and bars have popped up. Some retail has established itself. New York’s first farm cidery opened it’s doors only five years ago. Today, the neighborhood is under constant development “pressure” (for lack of a better word). The secret is out and this is a place people want to live, work and play. Some folks have referred to this area as  “Albany’s SoHo” or “DUMBO” which don’t really fit but the general attitude is this part of the city was largely industrial for decades, and as new factories and warehouses went horizontal  rather than vertical  (a whole other topic that would be fun to talk about) there’s a lot of vacant and underutilized space in Albany’s Warehouse district and a whole lot of potential development opportunities.  The City of Albany, recognizing the pressure on the Warehouse District and the timeliness of  a new, pending City Code, are using the District as a test case and will host a series of workshops at the end of the month. 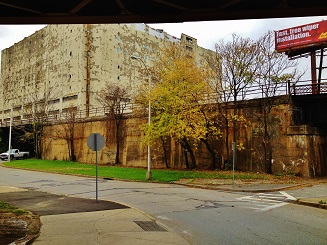 It may not look like much today, but this could be a fantastic future gateway into Albany’s Warehouse District

This is all very exciting on it’s own – but it’s especially exciting for the supporters of the Livingston Avenue Bridge Walkway. Within a 15-minute walk of the bridge, just north, there’s a frenzy of activity and interest in converting buildings to lofts and residential. The timing of this renaissance could not be better, as of course we’re advocating for a connection to this neighborhood. In fact, we imagine a very short and simple connection between this district, the Corning Preserve, the new Huck Finn’s Playland, and the Livingston Avenue Bridge – OF COURSE! Check out a map here.

Our good friends at All Over Albany had an excellent article on the Warehouse District workshop, so rather than reinvent the wheel, here you go.

From the Warehouse District promotional material:

Why should I participate in the process?
This is your community. You are the expert. Who know the community better than someone who lives and/or works here. ReZone Albany is a rare chance for you to be part of creating positive change, impacting the growth of your City for years to come. We need your ideas, input, and feedback to ensure that the vision reflects community values and aspirations. ReZone Albany of the public in order to arrive at a collaborative solution. Future workshops will focus on other areas within the City of Albany.

Within 15 minute walk from the other side of the Bridge there’s a development pressure of another sort – a vacant waterfront canvas eyed by SUNY Poly Tech. A panel, led by the City of Rensselaer will evaluate use of waterfront land, which will include “potential housing for incoming corporate partners and SUNY Poly staff and employees, advanced manufacturing facilities, high-tech research and development, and classroom and academic space,” according to the Troy Record.

← Look what you did!
I-787/Hudson Waterfront Corridor Study underway →