One of the initial reactions we get from folks we’re introducing the walkway concept to for the first time is “Will that be safe?!”

In a word, yes. For one, the latest incarnation was built with a walkway – so we’re not going to the moon. The potential design could be no more revolutionary than say, any walkway attached to a bridge. 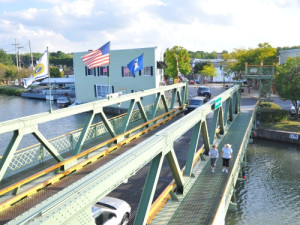 It’s all relatively simple. The installation of fences and barriers can prevent people from climbing off the walkway or falling into the river while also protecting them from potential debris kicked up from trains. A set of automated gates can prevent walkway users from falling off the walkway when the bridge is open. Similar systems are in place on lift and swing bridges over New York City’s East River and along lift bridges that cross the Erie Canal.

This rail bridge in Harper’s Ferry, WV is a part of the 2,200-mile Appalachian Trail and it connects the C&O Canal and a National Park. See more photos and the blueprints for the separated walkway. 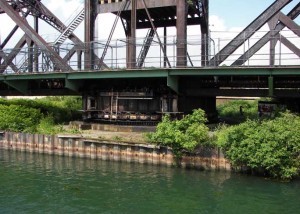 Buffalo’s International Rail Bridge (open, close up), between Niagara Boulevard and Squaw Island Park is a rail bridge with a swing function and a cantilevered pedestrian walkway. Here are the blueprints. A swingbridge with a cantilevered walkway that connects a city to a park! Sounds familiar, eh?

Portland’s Steel Bridge is the “Cadillac” example of a multi-modal bridge that opens to allow river traffic, yet still features a pedestrian walkway. This bridge carries vehicular traffic, Amtrak rail, freight rail, commuter rail, an expressway, AND a cantilevered walkway! 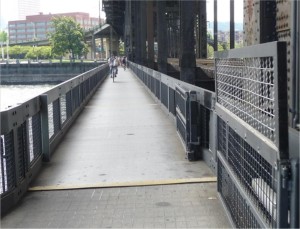 Gates on the Steel Bridge Walkway

Finally, it was Federal Rail that wrote the book on safety when it comes to rail with trail. In 2002, The Federal Rail Administration, at the direction of the U.S. Department of Transportation, developed a report for the purpose of examining safety, design, and liability issues associated with the development of shared use paths and other trails within or adjacent to active railroad and transit rights-of-way. This comprehensive document not only outlines the risks and benefits associated with rails with trails, it also highlights several case studies, presents best practice design guidelines, and provides sample legal agreements for trail managers and Rail Road operations. When the report was commissioned, there was an estimated 400 miles of rails with trails in the US. By 2007, Rails-to-Trails Inc. estimated the total US mileage of Rail with Trail had grown to nearly 900 miles of safe, accessible, and popular trail adjacent to, and in close proximity to operating freight, passenger, and inner-city light rail.

Can the walkway be designed, constructed, maintained, and managed to create a safe and secure, reliable bike and pedestrian crossing? Yes. Absolutely.

← Is your support going to be the tipping point?
Promoting the Pedestrian/Bicycle Pathway ~ Livingston Avenue Railroad Bridge →