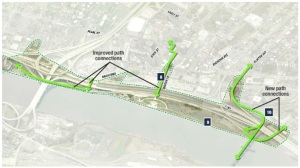 Have you checked the Capital City’s  “Impact Downtown Albany” plan? The “Briefing Booklet,” a sort executive summary to a larger document we can only assume has yet to be released, made some waves yesterday and it is a bold, exciting vision for downtown. Great imagination at work here, and the design team earned their paycheck on the sparkling renderings of areas of the city that desperately needed some imaginative love.

Of course there’s a line on the map for the Livingston Avenue Bridge walkway. It’s potentially the most important bicycle and pedestrian connector in the region. OK, we’re partial… but yes, it is in there (as you can see to the right).

Turn your attention to pg. 17, Vision Concepts for The Corning Waterfront:

Then to the next section, pg. 19’s Warehouse District:

ACTION ITEMS INCLUDE:
• Extend a recreational path from the Corning Riverfront to Arbor Hill

• Commission artwork to transform the Cold Storage Warehouse, Broadway railroad bridge and/or other prominent structures
• Install signage to identify the district and enhance wayfinding to Downtown and the Corning Riverfront”

Something is missing, no? These action items identify signage, connections, working with NYSDOT, heck even the laudable but very lofty goal of turning an exit ramp into a our version of the “Highline.” Where’s a little love for the Livingston Avenue Bridge Walkway? We don’t intend to come off bitter, the lines are on the map, there’s a decade of studies to support it, the city and county (on both sides of the bridge) support the concept. But the walkway should be entrenched in the minds of designers and project managers by now, right? Shouldn’t it also be a slam-dunk, no questions asked, no doubt about it addition to the action items in the the Waterfront and/or Warehouse District recommendations? These days it is so easy to do a word search that it comes as second nature when a plan comes out in which the Walkway could/should be a mention. The term “Livingston” doesn’t appear once in the document. That smarts a little bit.

So hey, great start – I don’t mean to detract from the hard work, and thanks for the lines, truly – but please, let’s put the walkway back on track, front and center, and make it a codified priority for waterfront and downtown development.

← NY invests $70 million in bike and pedestrian improvements for 2014
$2.3 million in Waterfront Improvements near the Livingston Avenue Bridge →