On May 26, the Livingston Avenue Bridge Coalition received a letter from the Federal Rail Administration.

“The U.S. Department of Transportation’s (DOT) Federal Railroad Administration (FRA) is writing to invite your organization to participate in consultation pursuant to Section 106 of the National Historic Preservation Act (Section I 06) for the Livingston Avenue Bridge Replacement Project (Project) in the cities of Albany and Rensselaer, New York…” 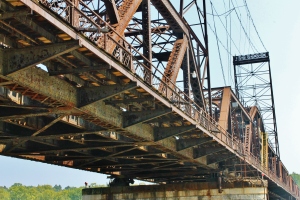 This opportunity to participate in the project as an advisory stakeholder is a very positive sign. It’s been three years since the FRA and USDOT released the DRAFT Environmental Impact Statement for the Statewide High Speed Rail. The Coalition was critical of the statement for neglecting to note the the Bridge Walkway in the discussion of affected resources for the area surrounding the Bridge, however we were assured by State and Federal program managers that when it came time for individual project analysis the Bridge Walkway would be discussed in further detail. From that point forward we had to wait and remain optimistic. Although an Amtrak “band-aid” had us feeling that a replacement bridge or significant investment was a long way out, the May 26th letter is an encouraging sign that the project is moving forward – if only just the preliminary engineering phase. Better yet, and I realize I’ve buried the lead here, it looks as if bike and pedestrian accommodations will be considered as part of the project.

“The proposed Project includes improving passenger rail operations, service reliability, and operational flexibility,” the letter continues on page 2. “It is intended to improve the load capacity of the corridor and address existing structural operational limitations, reduce delays, and minimize conflicts with navigational traffic. These goals will be achieved through improvements to the bridge to support simultaneous two-track operation, identifying and correcting track deficiencies to meet current standards, improving freight and passenger movement across the bridge, and providing a river crossing that meets or exceeds existing horizontal navigational clearances while providing pedestrian and bicycle connectivity between Albany and Rensselaer.”

We have a long, long way to go, but this is a very encouraging first step and we’re overjoyed that the project stewards at the Federal Rail Administration, New York State Department of Transportation, and National Railroad Passenger Corporation are moving forward with this project and taking the critical bike and pedestrian connections into consideration. The Coalition advocates for the restoration of bike and pedestrian access to the historic bridge, and if that cannot be accommodated due to the replacement of the structure, then the new structure should be constructed with bike and pedestrian access. Because Section 106 of the National Historic Preservation Act of 1966 (NHPA) requires Federal agencies to take into account the effects of their undertakings on historic properties and work to resolve these effects, the 106 assessment should include the consideration of the walkway and actions that are to be taken to preserve or replace the walkway structure.

We’ll continue to provide updates as the project advances. Given the development pressure at both the base of the Albany side of the Bridge and the Rensselaer side of the bridge, the connection can’t come soon enough.

← Where have we been?
Many Thanks to the Rensselaer Land Trust →