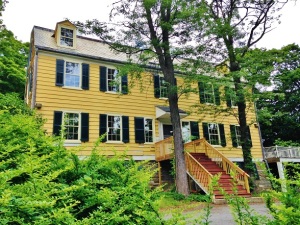 Join advocates on Saturday May 2, 2015 for a bike tour of the proposed South End Bikeway Link (SEBL) to connect Albany’s Corning Preserve Waterfront to the new Albany County Helderberg Hudson Rail Trail. The tour will  kick off at 9:30 am from the Albany Area Heritage Visitors Center. The eight-mile ride through Albany will highlight a proposed SEBL route and some very interesting and historic sites with commentary at selected locations including the Albany Heritage Area Visitors Center, Historic Cherry Hill , Lincoln Park, Madison Ave. and its proposed Protected Bicycle Lanes, Ten Broeck Mansion, and Schuyler Mansion.

The event followed by an on-your-own lunch at the Pump Station. Note, ride organizers do not recommend tour participation for children under 16. Helmets required.

In October 2015, the Albany County Helderberg-Hudson Rail Trail will open. This multi-use, paved path will connect Delmar in the Town of Bethlehem with the City of Albany along the spectacular Normans Kill Gorge. When completed, it has the potential to connect to a network of bicycle and walking paths reaching including the Corning Preserve Bike Path, the Mohawk-Hudson Bike-Hike Trail, the cross-NY Erie Canalway, the Champlain Canalway, and across to proposed trails in Rensselaer County via the Livingston Avenue Bridge.

Advocates for the SEBL are asking local and state partners to help close the 1.5 mile gap between the eastern terminus of the new County Rail Trail and the southern terminus of the Corning Preserve Trail.  A coalition of four grassroots advocacy groups, including the Livingston Avenue Bridge Coalition, are touting the benefits of closing the gap with a well-designed route of protected or separated bicycle lanes (that are also suitable for strollers, walkers, and joggers). This link will provide a safe and pleasant way to connect to an endless variety of destinations at the waterfront area such as businesses, historic sites,and cultural attractions  – all directly accessible from the South End Bikeway Link.